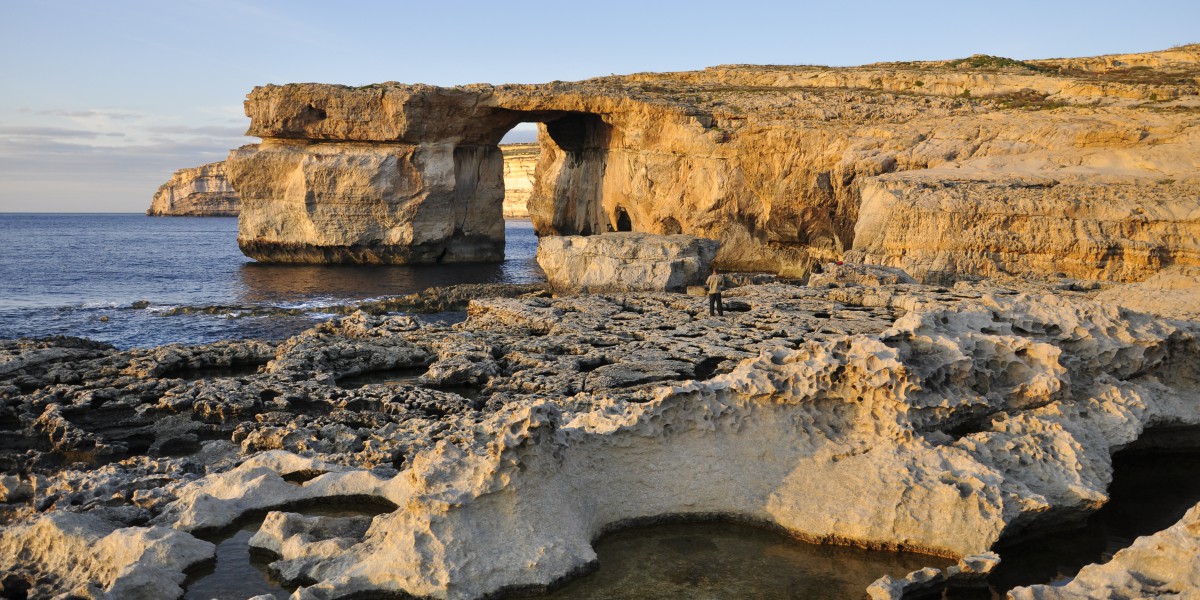 One cannot visit the Maltese Islands without visiting Gozo’s unique and impressive Dwejra Bay.  With Ramla Bay being most exciting where it comes to sandy beaches, Dwejra Bay located on the west coast of Gozo is the most popular rocky beach.  Decades ago a small house was found close to the Inland sea, and the name Dwejra which in Maltese means ‘small house’ was the given name to this location.  The Inland Sea known as ‘Il-Qawra’ by the Gozitans is a stretch of shallow water connected to the open Mediterranean Sea through a 60 metre-long cave.  You can access the impressive natural rocky scenery with small fishing boats which will take you for a 25 minute ride from the Inland Sea to the other side of the cliffs.  In Dwejra, one do not only find the Inland Sea where locals and tourists spend their time swimming, snorkelling or sunbathing, but an abundance of natural features which are unique and spectacular. 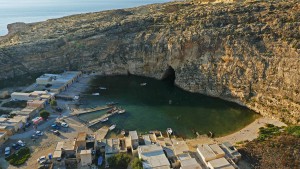 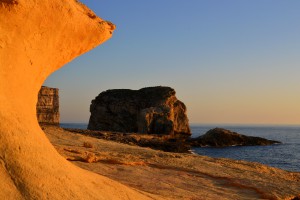 Immensely popular with artists, photographers and tourists is the Azure window.  This natural arch consists of two vertical perpendicular rocks holding a huge mass over them.  Unfortunately, this must-see Gozitan tourist attraction is corroding with wind and water taking a major part in this imminent breakdown.  The Azure window  also appeared in some films like ‘The Count of Monte Cristo’ and ‘The Clash of the Titans’.

Another connotation with Dwejra Bay is the Fungus Rock or as known locally ‘Il-Gebla tal-General’.  A rare flowering plant during the Knights of St.John era was used as medicine to cure their wounds.  The Fungus Rock and its ‘Malta Fungus’ plant was of high importance to the Knights in a way that they decided to block the access to this rock and placed guards against any intruders. 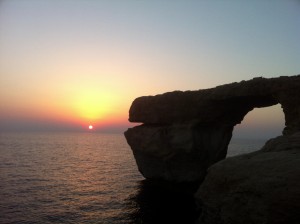 Another important characteristic is the Dwejra Coast Watch Tower.  Built in 1651, its main objective was to guard the west coast of Gozo and a later stage it used to guard the Fungus Rock and it’s medicinal plant.  There were times where the tower was abondoned but two decades ago restoration works were done and it is open all year round for the public to see.  One should note that Dwejra is also a perfect place to be to watch the wonderful scene of the sunset.

With Gozo having all these rich attractions, one cannot deny a great holiday in Gozo.  Thinking of a rich accomodation in Gozo? We are available for you.  Click on Madonna Ta’ Pinu farmhouse for our farmhouse accommodation availabilities.